One day, Jos Baart heard some noise coming from just outside his window, he thought it was some pigeons making themselves at home in his window planter.

However, he was surprised to see instead, four eagle-owls set up inside his planter box, just outside the window of his third-story apartment.

“I thought, damn, those pigeons again. Well, they are not my friends,” Baart told Vroege Vogels.

“One time I got home a bit early, so I went to check and see what was there. Then she [the mother] flew away,” he said.

“The entire week it was this owl that was calling. For me, it’s like watching a movie 24X7. When you wake up in the morning, they are right there in front of the window,” Baart added.

He said that he talks to the owls. “You can see how relaxed they are. They’re not scared at all,” he said.

Here’s the full video of the story below:

The Eurasian eagle-owl, despite being one of the world’s largest owls, is difficult to spot in the wild, and even harder to capture on camera. 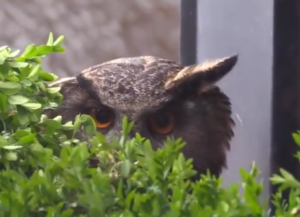 These birds are often found on cliff ledges and gullies, but apparently they also use window planters.

Baart heard noises coming from outside his apartment window and discovered his new Eurasian eagle-owl neighbors.

Now, when he watches TV by the window, the little owlets line up against the glass and join him by watching the TV. 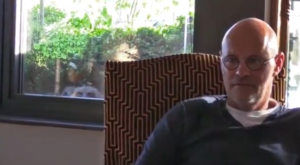 So much so that Baart grew fond of their company, he hopes that one day they will return to this spot to raise their young ones.

“Hoping that they will return again next year,” he added. ” Yeah, bring them on!”

RELATED: People Are Delighted To Learn That Baby Owls Sleep Face Down Because Their Heads Are Too Heavy (25 Pics)