Meet Huskies, Lilo, Infinity and Miko, who have become a family to a rescue kitty called Rosie who joins them in all their doggy activities.

Bringing any animal to a home that has another animal, let alone of another species is always a risk. But it seems this husky pack have taken Rosie in as one of their own.

Poor little Rosie was rescued by the three husky sisters from the streets of California when she was just three weeks old.

Apparently, the poor kitty was “malnourished, lethargic and dying.

“We took a chance and put her with Lilo, and Lilo really saved her life”

Bui, one of the husky’s humans.

“Lilo never left Rosie’s side for hours. She cuddled her and comforted her until she was better and ready to finally drink from a bottle.”

The humans to all three Siberian beauty’s are actually cousins in real life and live on the same road as each other. Little did the adorable trio know they would be adding a fourth member to the pack.

The group eat, sleep and play together, don’t forget Rosie joins them in every moment of their daily activities. 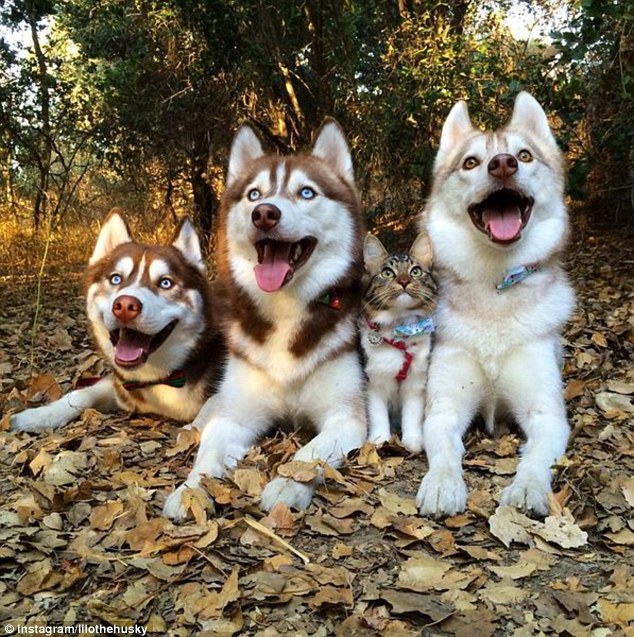 Rosie quickly bonded to her adopted momma Lilo, she would regularly look up to the elder dog for guidance.

‘We go on a lot of road trips, and we recently took Rosie kayaking and paddle-boating with us,’ Bui told ABC.

‘She’s not afraid at all, and as long as Lilo is there, she knows everything is going to be OK.’

Now Rosie basically follows her husky family over the house, she goes on walks and even steals dog food.

They love going on mini adventures, and apparently, they particularly love playing in the snow.

It’s crazy to think when Rosie was found, she could barely even open her eyes.

Lilo’s owner Thi Bui says, ‘the first night we got Rosie, she seemed OK but then her health went downhill all of a sudden – she rejected food and wouldn’t lift her head anymore.

“Her eyes became infected and closed. We were providing all the human care we could, but we realized she needed a mother so we paired her with Lilo, one of our huskies.”

“Amazingly, Lilo took on the motherhood role instantly, which was surprising because she has no pups of her own and was spayed the week before we got the kitten.”

“Rosie’s health improved dramatically thanks to Lilo who has raised her as one of her own – so she’s growing up thinking she’s a husky now and she even goes on walks with them.”

Now, the adorable kitten and husky pair are inseparable.

“When she saw Lilo and the dogs went outside to potty, she started doing the same,” Bui told ABC.

“When they were leashed to go on walks, Lilo wanted to be leashed and to come along too.”

Sleepy pals: Thi Bui said in July: “The two of them are inseparable – they sleep together at night, and Rosie imitates everything Lilo does, including sneaking dog food.”

“She’s so tiny but she tries to keep up with the other huskies, bless her – she runs after them when they play, she wrestles with her mother Lilo, and walks with the pack when her little legs can manage.”

“We separate them sometimes to give Rosie a break because Lilo doesn’t know she’s so big, she can hurt Rosie without realizing it.”

“They hate it though – Lilo lays by the door where Rosie is, and Rosie lies on the other side and they both whine and cry like Romeo and Juliet.”

“It’s super hilarious because when they get to see each other again, both of them go crazy.”

RELATED: Panther Abandoned By Its Mother Grows Up With A Human And Rottweiler Best Friend